For many students, history can be a dreaded subject with a lot of reading and a long list of dates and names that can easily get muddled. All those foreign names: Georges Clemenceau. David Lloyd-George. Gustav Streseman. Josef Goebbels. 1918. 1933. 1939. All those agreements and betrayals. All that death and hate.

Death and hate was not what I wanted as a take-away for 8th and 9th graders studying Germany from 1918-1945. I wanted to make this study about more than just prejudice, hate and ultra-nationalism, which is hard for a period that invented the term genocide. 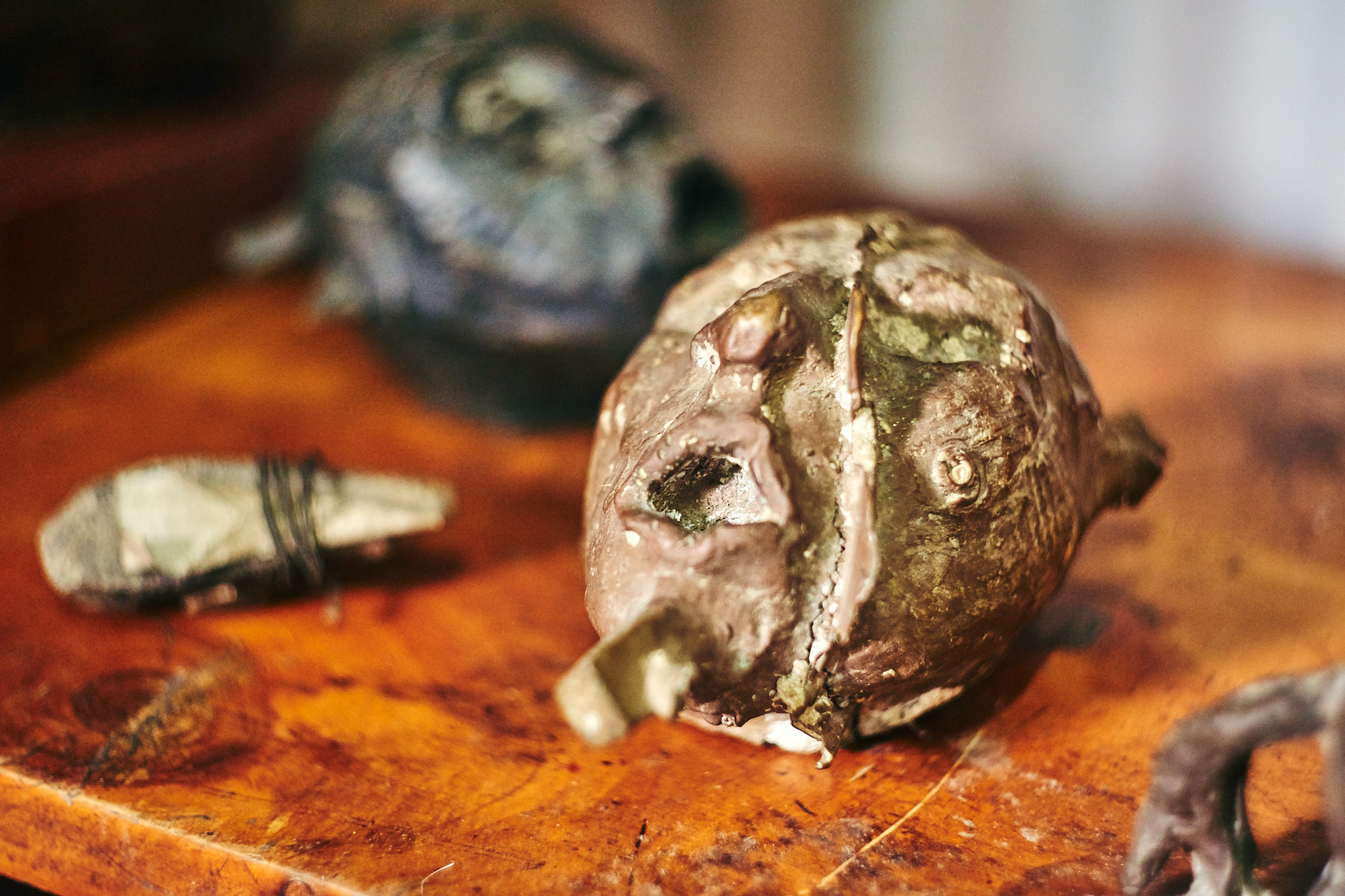 The learning objectives of the 2-year Cambridge 20th Century History course center on the themes of cause and effect, change and continuity, similarity and difference, always looking closely at events from a variety of perspectives, using contemporary primary sources as well as text books, documentaries and the internet.

How did the German people see the Treaty of Versailles? How did the French see it after losing to disease and war fully half of the young men born in 1894? Why was the Weimar Republic – the world’s most progressive democracy – unpopular? And why did so many in Europe and America see the rise of Hitler as a positive change? 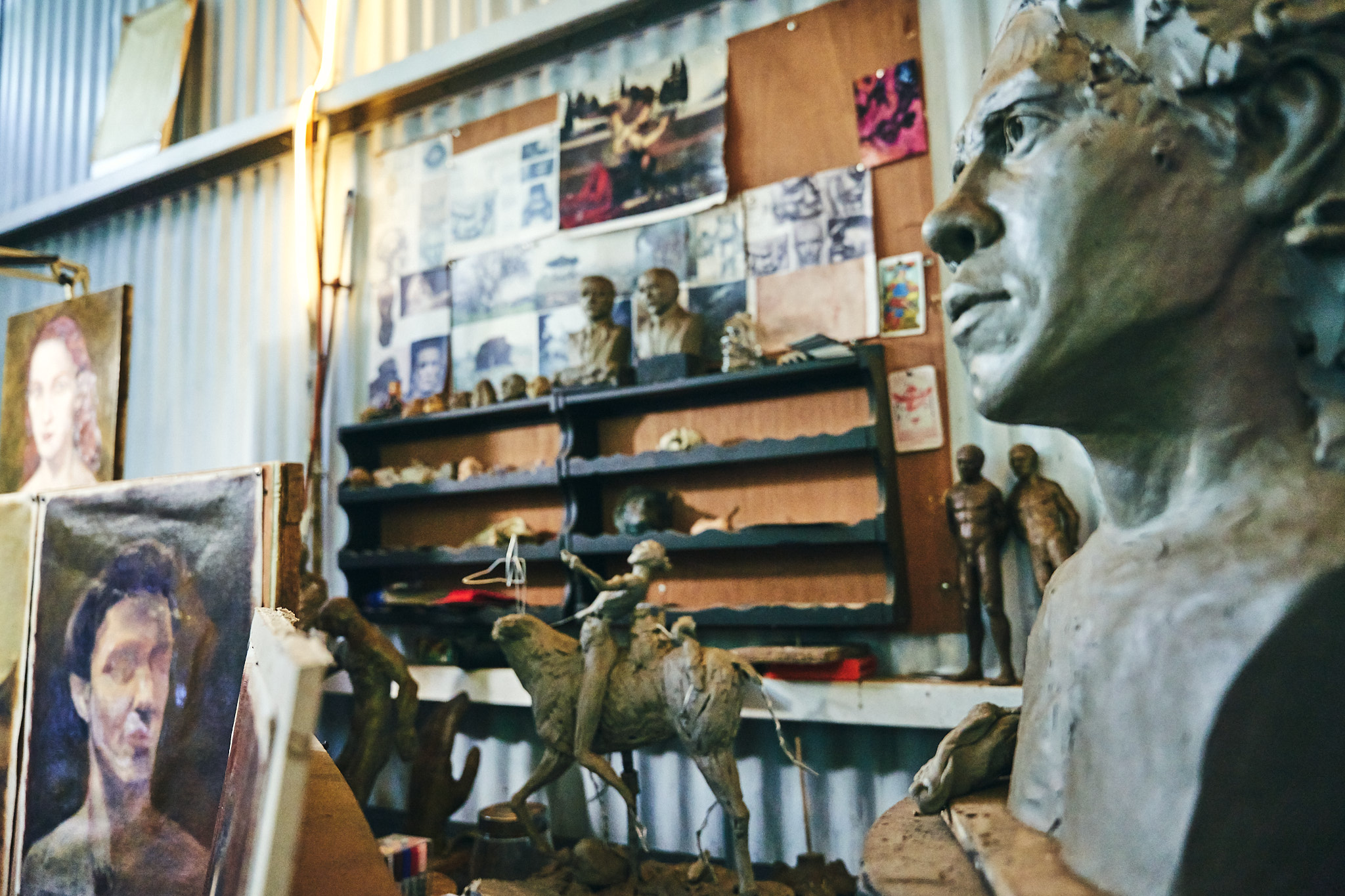 David Lloyd George called Hitler “one of the greatest of men” in an article published in 1936 in the Daily Express. The man responsible for a government that killed millions of people out of racial hatred and started a war that killed millions more, was praised as Germany’s “George Washington.”  A frequent question from students is, “How did people not know? How did they let it happen?”

“He wrote his book [Mein Kampf],” Camilo remarks. “It was all right there. More land. No communists. Blame the Jews.”

“I think people just wanted to be fooled,” adds Alex. “They had jobs. They were happy.”

To cover the events from a fresh angle, we decided to recover some of the names and faces of people who stood up for their generation, or were caught up in its events. Who were the resistance fighters? Who were the dissidents who ran counter to the laws and policies and saved the victims of the Nazi race laws?

We found children and the elderly, parents and teens, from Germany and German-occupied territories.  Using the timelines of their lives, we have been able to give context to events like the Treaty of Versailles and Germany’s surrender in May 1945. It has made history more human-sized, more relatable.

For example, Sophie Scholl was born two months before Hitler took over what became known as the Nazi party. (She would be executed in 1943 for handing out ‘subversive’ pamphlets at her university.)

George Maduro, a Sephardic Jew born in Curacao, moved to the Hague in 1926. He was 13 at the start of the Great Depression, 17 when Hitler became Chancellor. He would escape from prison twice before dying of typhus in Dachau in 1945.

One of our subjects is still alive today (Peter Feigl). Working with actual people gave the events perspective, and sparked curiosity. “Where was my person when Krystallnacht happened? Would they have read about it in the newspaper?”

Putting a face to a name

It still wasn’t easy for students to feel like their subjects were once ‘real’ people. At first, they were just names with dates of birth and death. T. Florencia is a sculptor, and so I proposed to students that we create a bust for each of our subjects. (‘Oh no, teacher! First they were forgotten, then they will be remembered as ugly!’)

To ensure we did the best we could, T. Florencia taught one history class per week in the art studio, so students could learn the design process from brain storm to completed model. Early classes included studying the proportions of the body and the face. We visited the Jade Museum to see the sculptures created under T. Florencia’s direction. Students sketched the sculptures and measured the proportions: an adult is approximately 7 human heads tall, while a child is five. An adult’s face is roughly the width of five eyes. Its length is approximately three noses.

“Too bad we couldn’t interview these people,” one student commented in a class halfway through Term 1. “Almost all of our subjects are dead.”

Thankfully, we could meet a descendant of a Holocaust survivor. In March, we visited the synagogue and interviewed George Blau, the son of Kasimir Blau. Mr. Blau told us how his father survived the concentration camp along with his grandfather.  “They were lucky to have each other,” he told us. “Together, they were able to stay strong.” 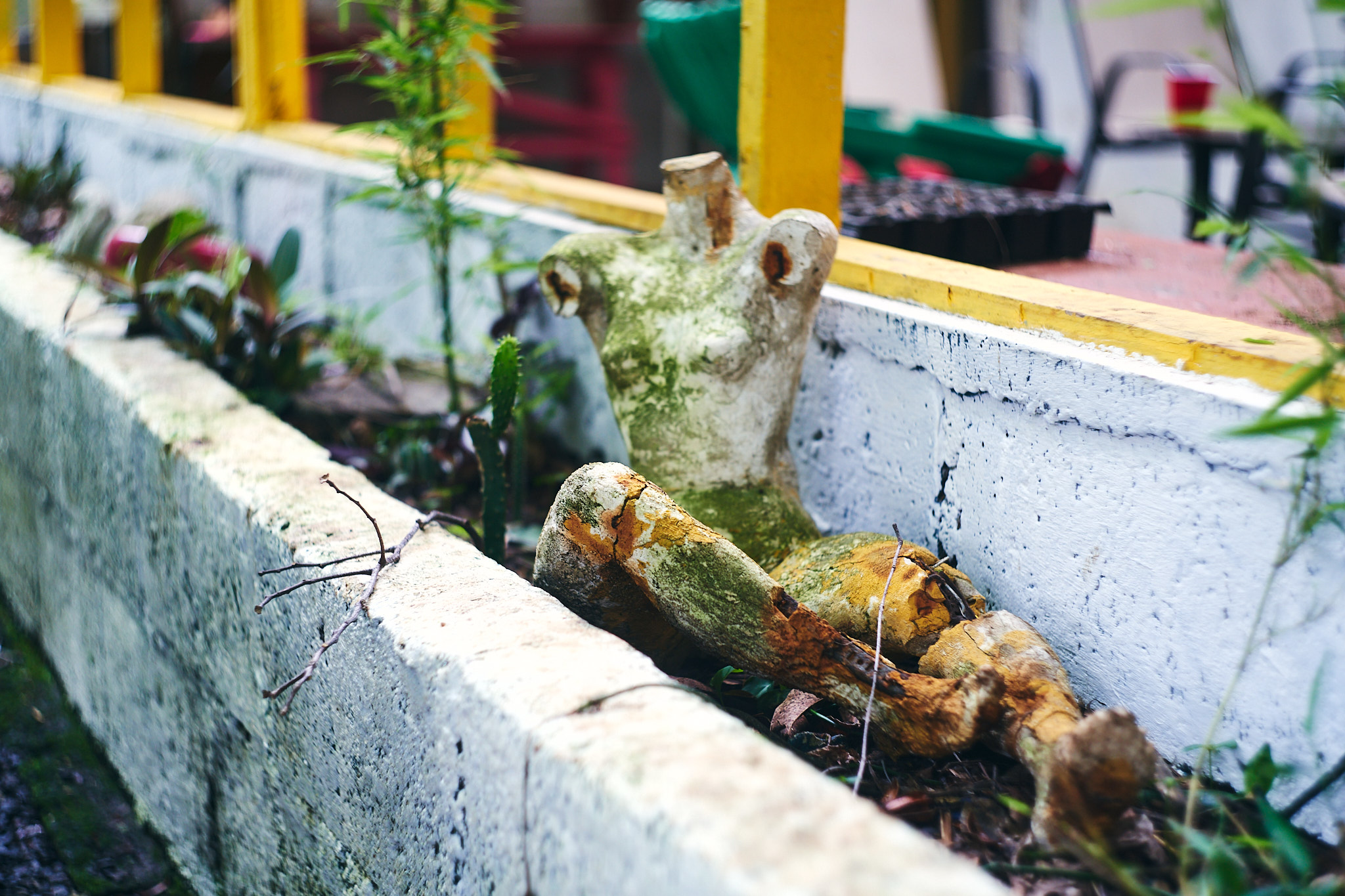 While in the camp, one of their jobs was to dig the ditches for the prisoners about to be shot by firing squad. When a soldier was looking the other way, George’s grandfather pushed a condemned man, who was  already lined up in front of the trench, back into the line with the work crew, handing him a shovel and saving his life. “The soldiers just thought he was one of us. Later my father met that man. He and his father were walking in Miami along a busy street, and the man looked into his face as they passed by on the sidewalk. ‘Kasimir! Kasimir!” he shouted. It was the same man my grandfather had saved. He told my grandfather, ‘I knew I would never forget your face.”

The students paid careful attention, asking dozens of questions both in the synagogue and in the Holocaust Museum. While the Germans defined a Jew as anyone having 3 or 4 Jewish grandparents, and mixed race people as anyone with 1 or 2 Jewish grandparents, we learned that Jewishness is actually passed down through the mother. Nor is being a Jew limited to race. Anyone can become Jewish through a process of education.

There is a lot of detail to manage in this depth study: the structure of the Weimar government. The terms of the Treaty of Versailles. The different international treaties like Locarno, the Anglo-German Naval Agreement, the Pact of Steel. To manage this information, students are learning to take better notes from lectures using Cornell Notes. In the next stage of information management, we will be adding fish diagrams, Venn diagrams, timelines, flow charts, org charts and SWOT charts. 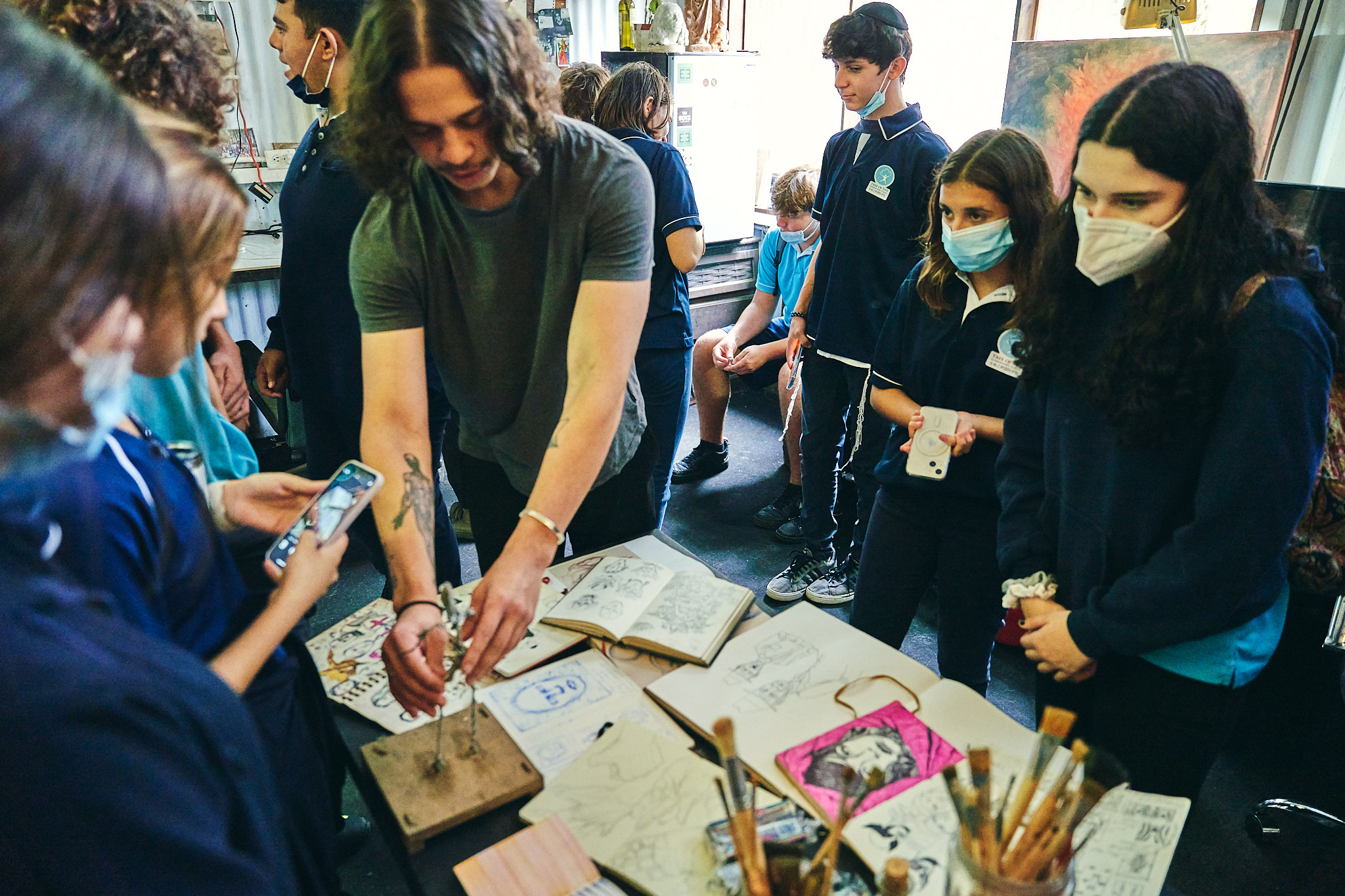 At the start of the course, quiz answers to essay questions tended to take up one page with 2-3  different arguments. Students had to explain why Germans turned to the Nazi party, for example, and be able to cite a variety of reasons to support their response. In the last five weeks of regular classes, students have assigned reading to help them review and prepare for the exam which will feature questions from IGCSE History past papers. Our goal is to manage enough information that students can create 2-3 page explanations, with evidence supporting each statement.

Back in the Art Studio

Each week, we have moved closer to our goal of creating a sculpture that resembles a specific person from history. Photo collages. A study of symmetry, noticing the differences between the right half of the face and the left. A study of physical and emotional characteristics, providing ideas on how best we could represent our subjects. 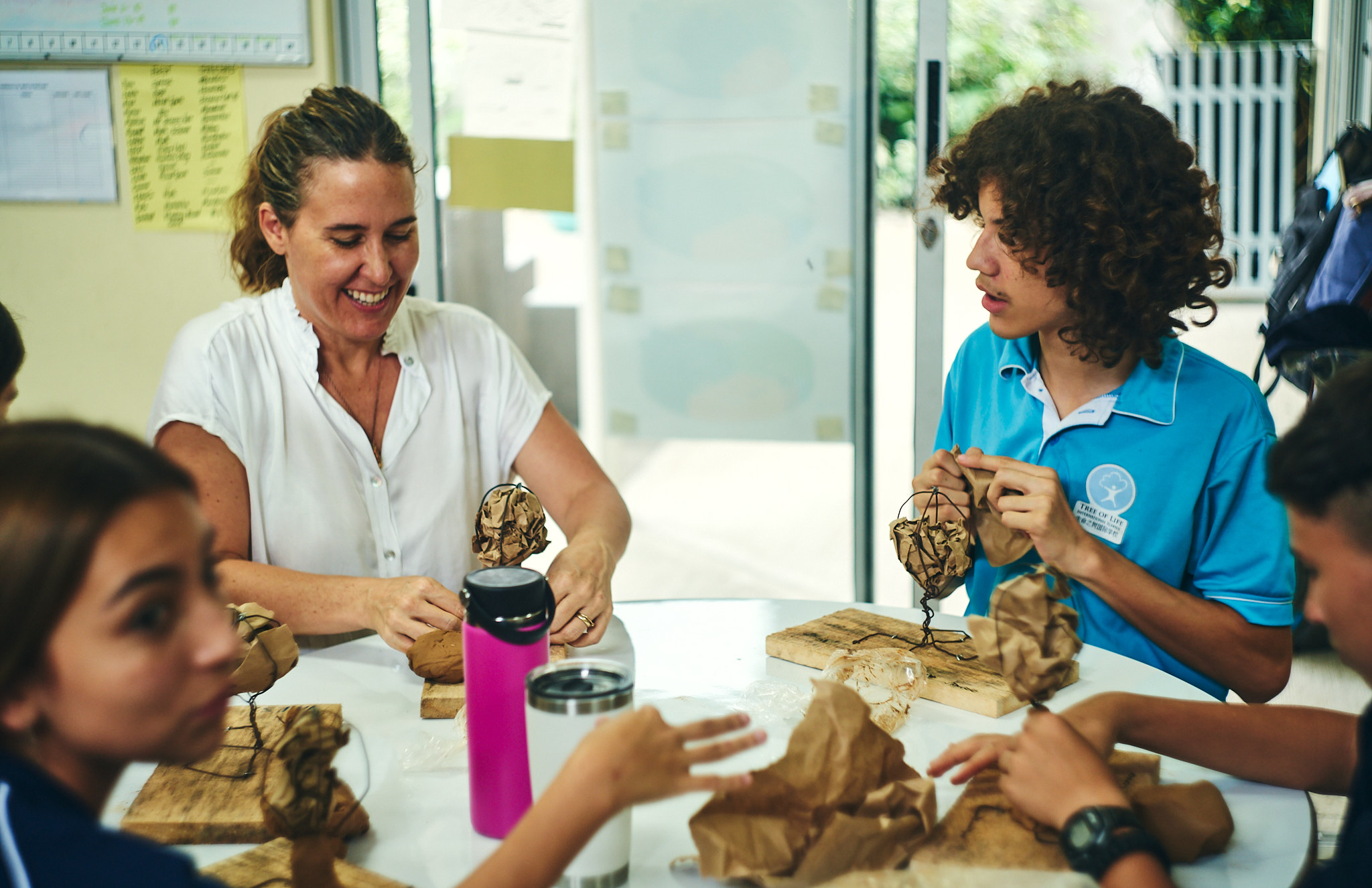 We started working with clay, first with simple shapes and then with features. Eyes. Ears. Mouths. Each student has a base for the sculpture, made from wire, over which we lay the clay and begin to work on the features. 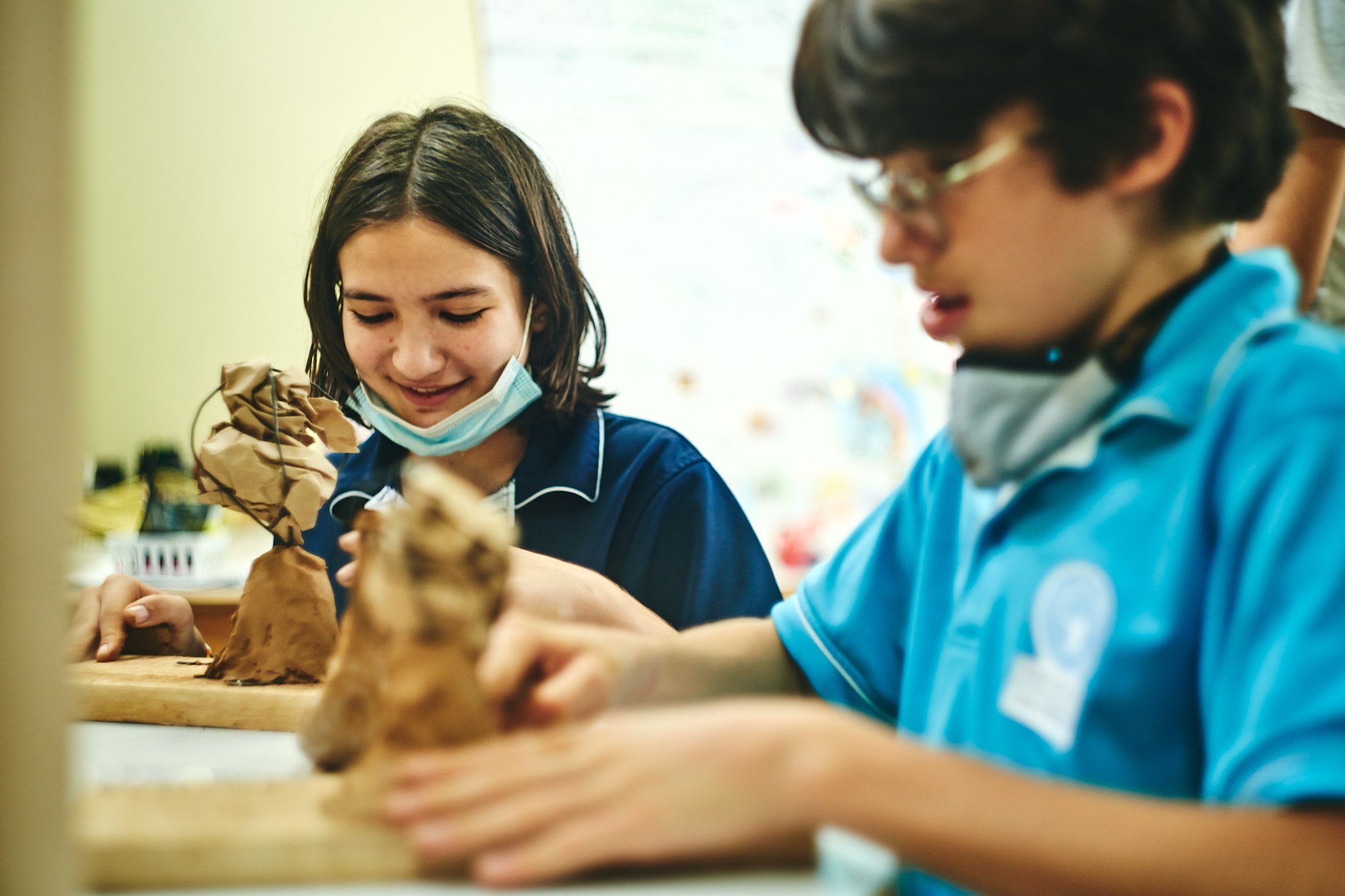 We talk a lot about the importance of planning and process at Tree of Life, but with a sculpture in mind, it was easy to lose this key element of project-based learning. All we could think about was the end result: how can we turn a lump of clay into a bust that looks like a real human being? We set out to make history more accessible, more tangible, but students worried they might produce something of inferior quality, something even more disconnected from reality. 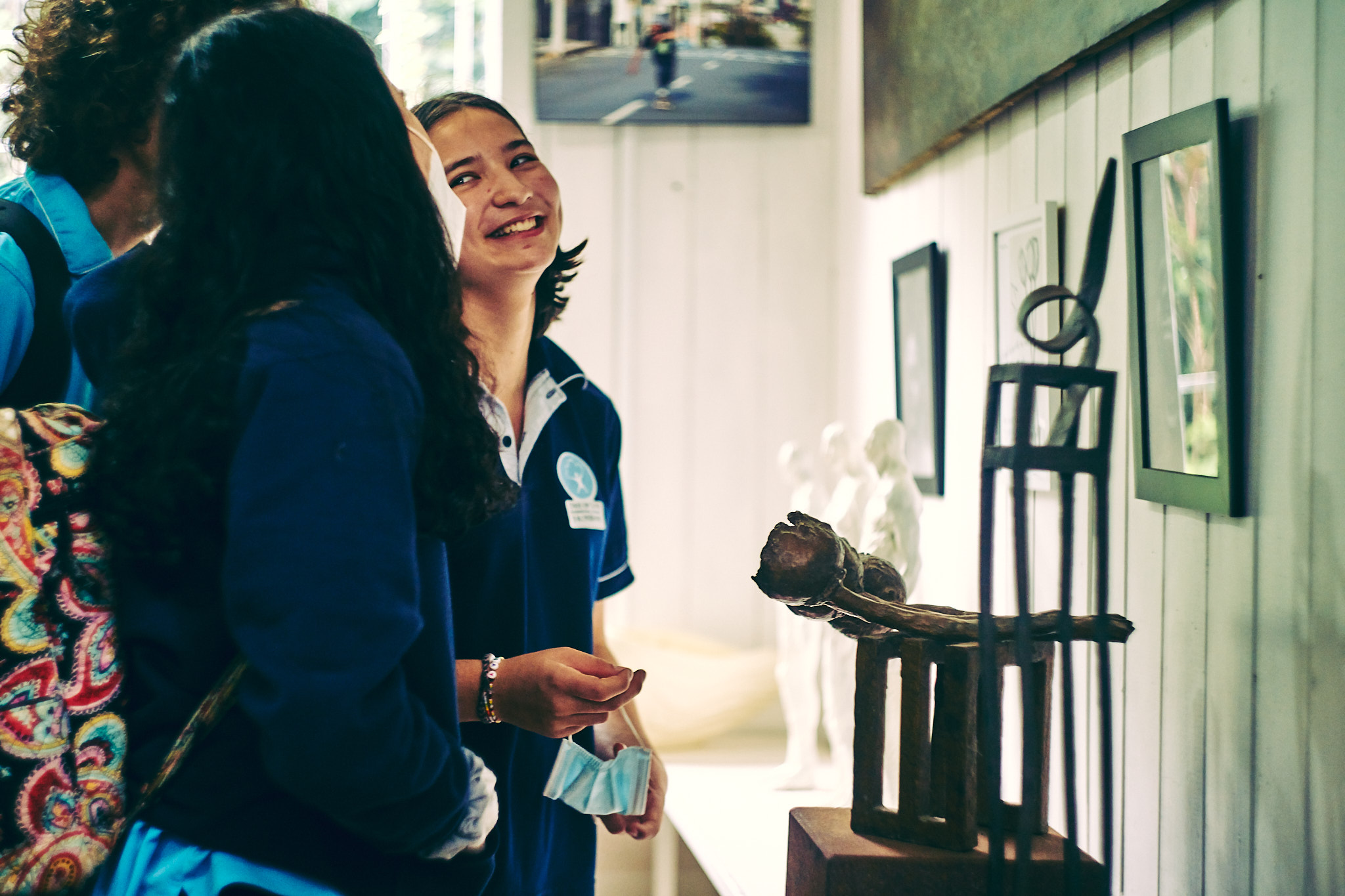 At first, students made an attempt to draw a face, and were embarrassed at the result, yet art is all about multiple attempts. It’s iterative: try, try and try again. We got to see that first-hand in our visit to Casa Fage. Gregory and Sara welcomed our students to their family’s gallery and studio. Gregory shared sketch books full of ideas, with practice sketches alongside more refined ideas. 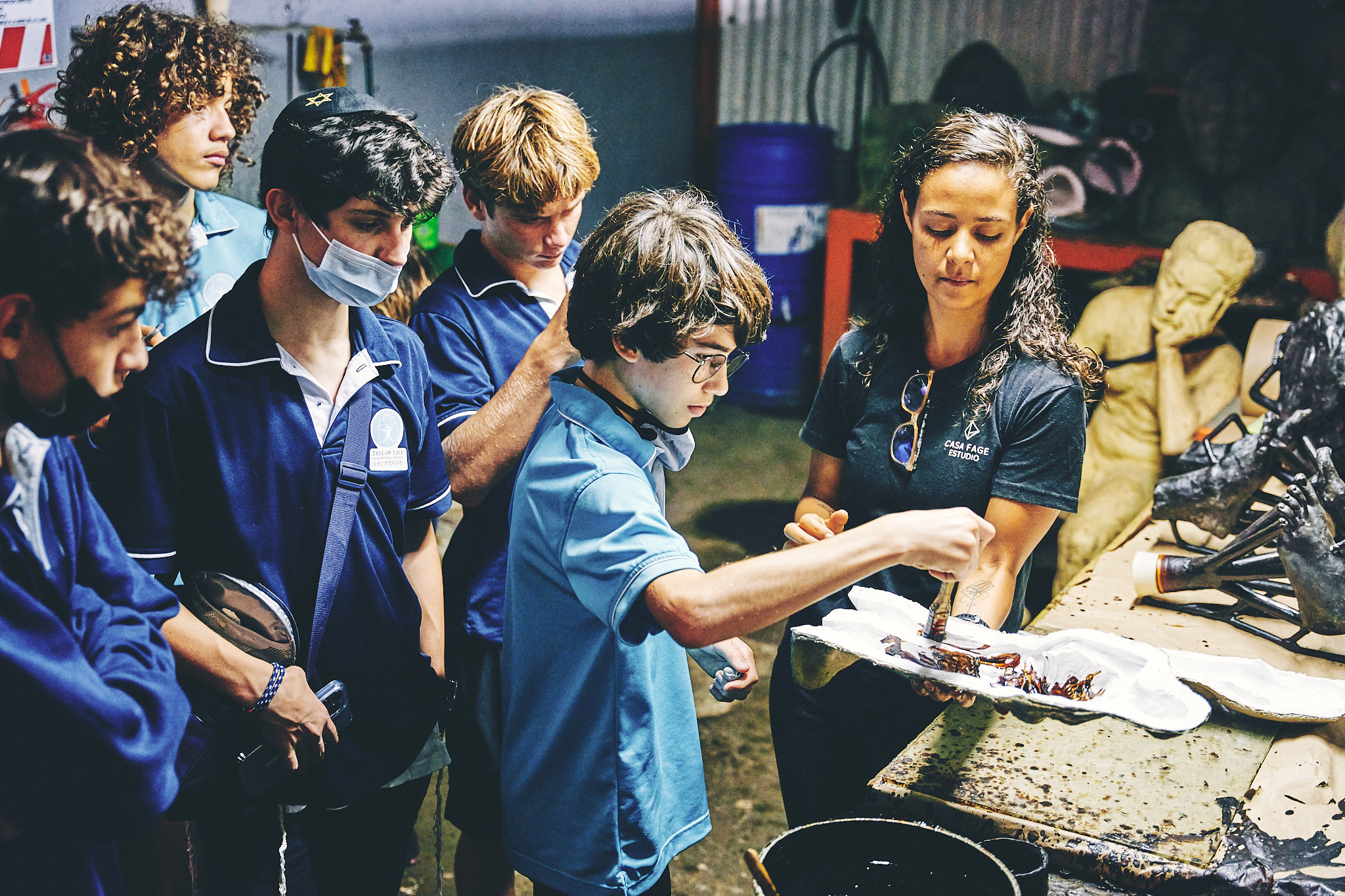 He showed how art doesn’t begin with the pencil touching the paper. Sculpture doesn’t start with clay. Curiosity comes before creativity. The key is to wonder, and as our students looked at the different works of art in all their different stages, I could see them beginning to wonder. 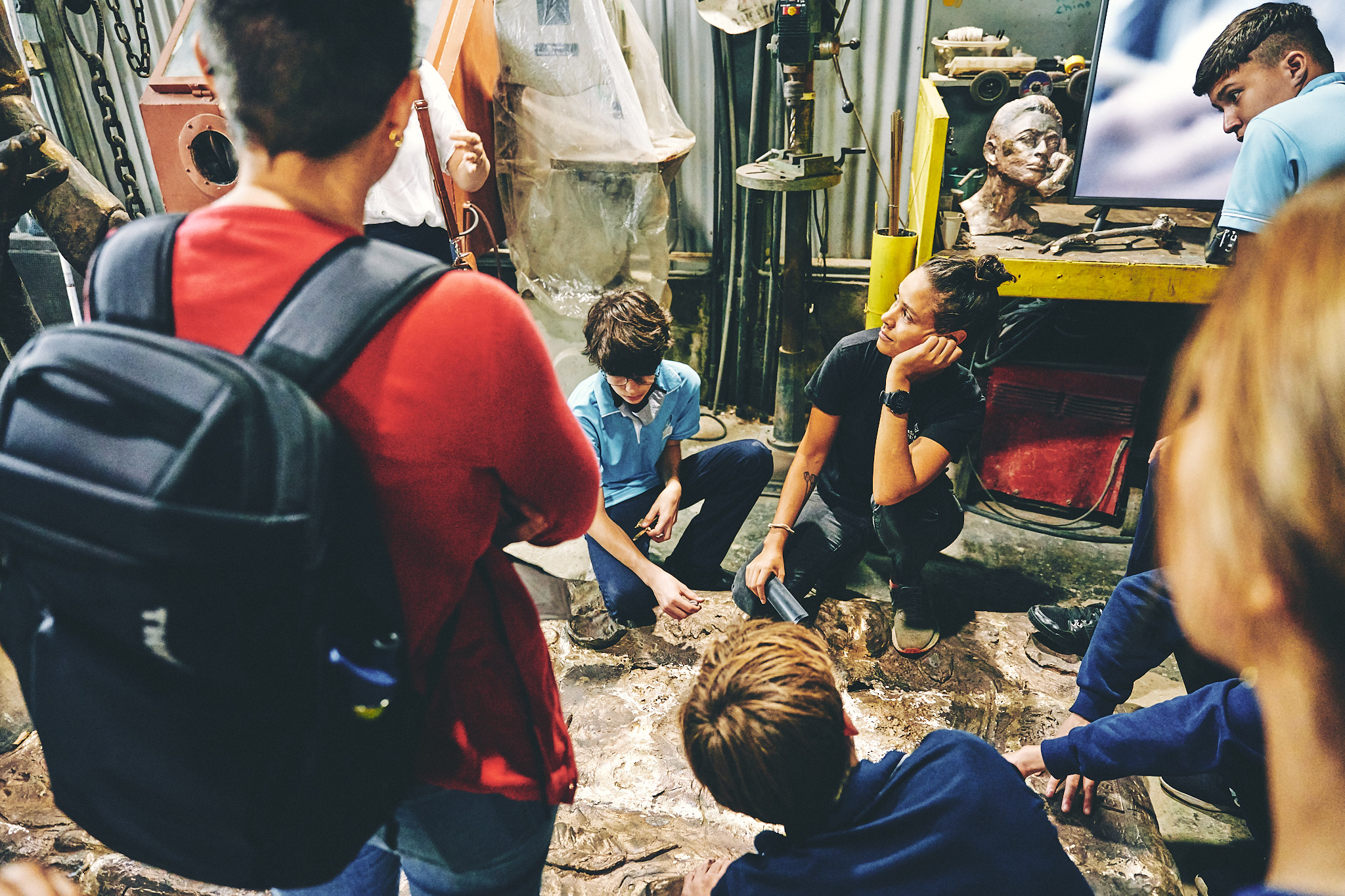 The visit to the foundry also showed how involved a process can be, each step critical to the overall success. Also, it truly put us in touch with history, because the process we were learning about (lost-wax casting) was over 6,000 years old! 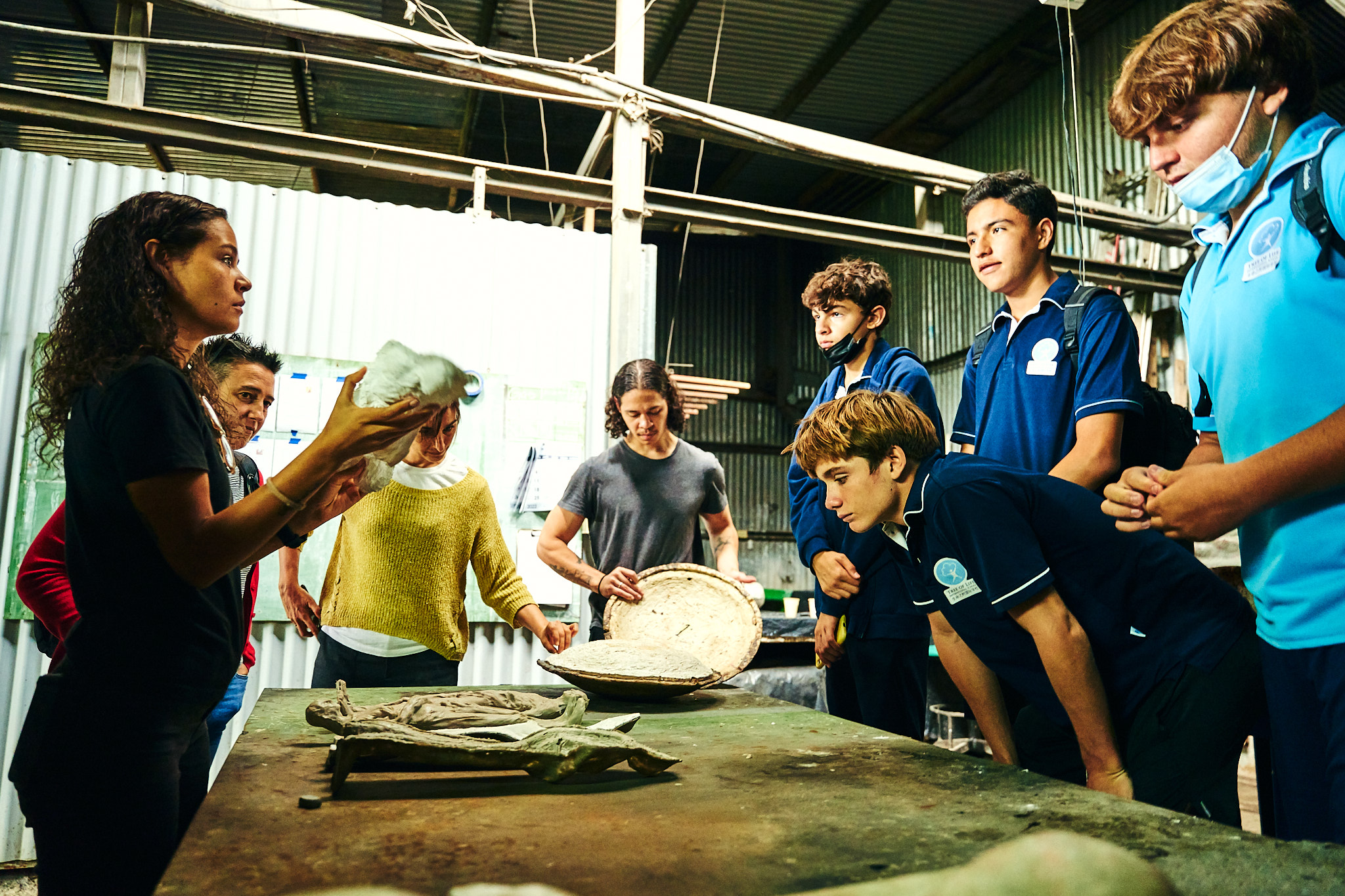 We are still working our way through the discovery and assimilation of techniques, tools and research. Getting fully connected to our subjects is still a challenge, which one of our students, Daniela Alfaro, decided to meet with a friendly competition: a costume contest, JR2A vs. JR2B. This next week, students from both groups will present their biographies in class, dressed as their subject. I’m looking forward to seeing what they come up with! 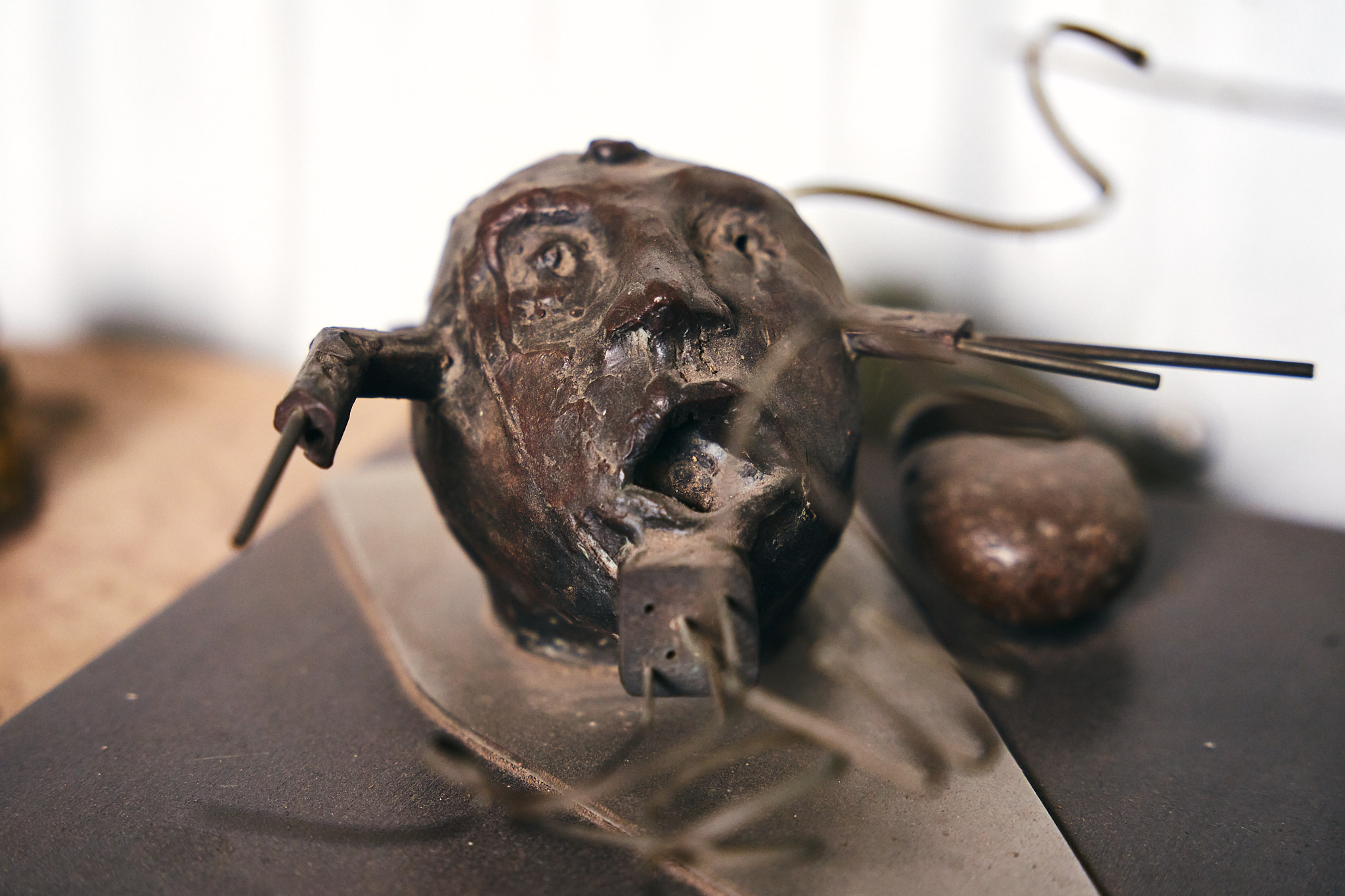 Watch for more on Forgotten Faces, which will be presented along with biographies and general information later this year.